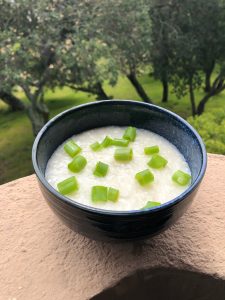 Rice porridge, also known as jook or congee is the chicken noodle soup of Chinese medicine.

The basic ingredients of rice, water, and broth can be combined with other ingredients to enhance flavor and to provide different health benefits.

At this time, when most people are concerned about their immune systems, I’d like to provide three variations to help support your health.

All three start with the same basic recipe, provided to us by owner of BOL Superfood Cafe, Chelsea Hutchinson:

Ingredients:
1 cup – Jasmine Organic White Rice (but any white rice will do)
8 cups – Liquid (a combination of Vegetable or Bone Broth and water, use a ratio of 2 cups broth to 6 cups water)
Directions:
Soak rice for 20 minutes in water. Rinse until water is clear.
Combine rice and liquid in a pot with room for the rice to expand.  If you have one, a ceramic or cast-iron pot is best, or you can use a slower cooker.
Bring the mixture to a boil and reduce heat to low.
Let simmer for 1-2 hours.  It is done when the texture is similar to oatmeal or cream of wheat.
If you are using a slow cooker, let the rice and liquid mixture simmer on low for 3 hours. It’s done when the texture is similar to oatmeal or cream of wheat.
Variation #1:  Chicken bone broth jook with scallions
This simple jook recipe is nourishing and often given at the first signs of a cold. Scallions are considered a food herb in Chinese medicine and help to invigorate the body’s defensive energy.
You can top your jook with as many freshly cut scallions as you like or add during the last 5 to 10 minutes of cooking to mellow the flavor.
Variation #2: Cinnamon and ginger jook 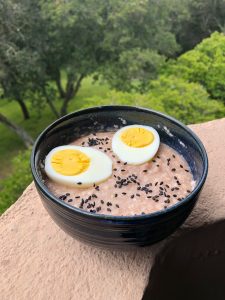 Cinnamon and ginger are two herbs that Chinese medicine often reaches for at the first signs of a cold. In fact, they make up 2/5 of the iconic Classical Chinese medicine formula, Gui Zhi Tang, which is the basis for many other herbal formulas in Chinese medicine.
I recommend adding 1 tablespoon of powdered cinnamon to the basic recipe above. (I really like Oaktown Spice’s Ceylon Cinnamon. Edit: They appear to be out of this specific product, but have several other varieties of powdered cinnamon still available to ship.)
If you have access to fresh ginger, peel one inch of a ginger knob using the edges of a spoon. Then, if available, use a garlic press to extract the juice and finely chop the ginger for you. A grater can be a nice workaround to chopping ginger too. Add ginger juice and chopped ginger to the rice and liquid mixture.
In this case, a hard boiled egg and a black sesame seed garnish (both food herbs) have been added to nurture reserve energy, which may be depleted by shock of the current health and economic crisis.
Variation #3: Tumeric, kale and seaweed jook 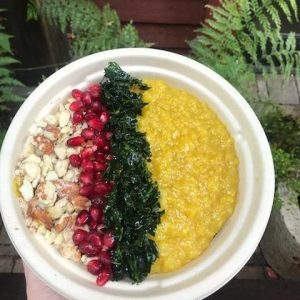 This is a New World style jook inspired by kitchen witch Chelsea Hutchinson at BOL Superfood Cafe in Mill Valley.
Chelsea adds turmeric and coconut oil into her jook and tops it with kale, Salt Point Seaweed Surf Snack, chopped nuts, garbanzo beans, and pomegranate seeds.
You’ve likely heard that high doses of turmeric been shown to have anti-inflammatory properties. In Chinese medicine, it is considered an herb that helps move the blood and improve circulation.
The current viral threat that we face acts by hijacking the body’s inflammation response. Individuals with circulatory dysfunction seem to be the most vulnerable to contracting and experiencing more severe immune responses.
Add 1 tablespoon of turmeric and 1 tablespoon of coconut oil to your basic jook recipe.
While the jook is cooking, rinse the kale, tear leaves from the stems and chop. Place the kale in a bowl and squeeze fresh lemon juice over it and massage. Doing this helps “cook” the kale and make the nutrients more bio-available. Kale is rich in quercetin, which both anti-inflammatory and has been shown to strengthen your body’s immune response to viruses.
Your body is able to absorb turmeric where there is fat present, which is why the coconut oil is added.  (It also tastes yummy and adds to the texture.)
In Chinese medicine, seaweed & seeds (which make up Surf Snacks) and beans, such as garbanzo beans, are also considered to help build your reserve energy, which can be damaged through shock.
Need help navigating your anxiety in the current health crisis?  Here are some practical suggestions for you.
The Chicken Noodle Soup of Chinese Medicine2020-04-162020-04-16https://www.purejoyacupuncture.com/wp-content/uploads/2019/10/pure-joy_logo_2019.pngPure Joy Acupuncturehttps://www.purejoyacupuncture.com/wp-content/uploads/2020/04/marin-acupuncture.jpeg200px200px
Categories
Recent Posts
Contact Info

For more than a decade, I’ve been providing acupuncture and massage services to patients in Marin County.